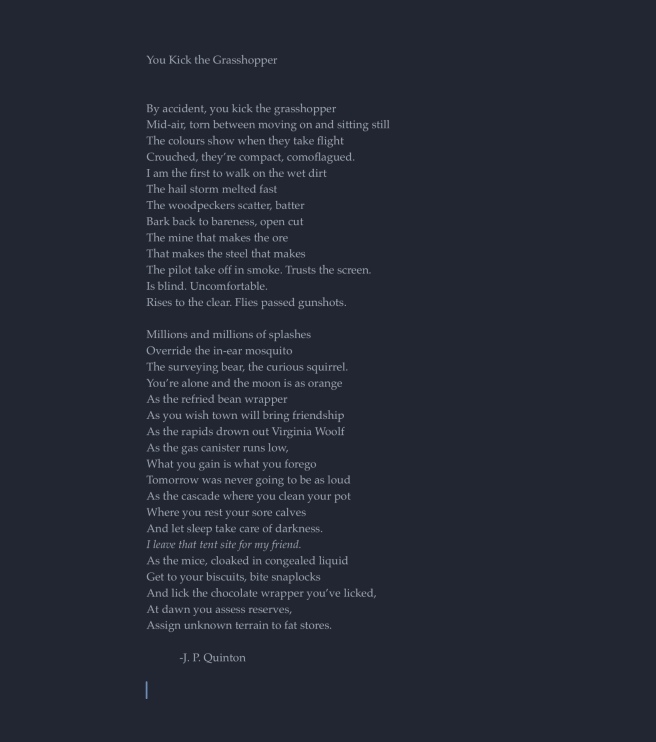 The headlights shine to the left.

A small stone cracks the windscreen.

In Pinjarra I give an ETA

Back when I had to run.

Inside she is behind the front wall.

She senses in me her own

Were her words, before she deleted

What little of us we had.

I’m not sure what she thought

I was looking for, as two bowls

Of half eaten salad sat between us,

But what I saw were these eyes

And inside was a fire trying

To extinguish itself, a light

More intense than I’ve ever witnessed

And slaughtered by red

That stuck across her iris

And bit deep into her pupils

That said she was barely able to cope;

That her illness didn’t care

For my sympathy and that soon

She would have to leave.

Walking Goals on the Pingerup Plains

I was locked out,

as if I’d snapped the key

off in the lock.

Beside me, my happy self.

Inside me, a monster and the dark room.

Out on the Pingerup Plains

loneliness ate at my feet

and there, as the leaf litter

sprang from the stepped-on twig

I could prove myself to my dark room,

I could fester and requiem.

What was distant was rest.

What was easy was distant.

I judged every thought,

I damned every thought with judgement,

and counted my steps.

My body needed pain to feel

and after mud and heath and brume

the blister puss splattered in my eye

and I pressed outside the slit

to let the wound suppurate.

The gear was fine, my body uninjured

but I had found something missing

I knew the victory I’d wanted would be hollow,

my traffic was gone, my blood

A fine mist made an answer;

pointless to ascend to the summit,

my ears rang as if covered in wool,

the waitress at Two Rubens Cafe

told me: a tradesman is free from obsession, you’re not.

To walk to the highway on my own terms

was the right thing to do

you don’t have to be brave

those reams written, they un-write,

as the woman with MS drives me to Denmark

and she tells me of brain legions

and her broken immune system,

how the knife is so blunt,

where the leaf cutter bee

as I wave at the ocean and have a morning nap.

I like Mary Poppins. She’s cool, calm, and full of surprises. Plus, she treats children like adults and adults like children, which is how we should act. We are drawn to Mary Poppins because she’s unpredictable. She transcends adulthood and childhood in a way that I aspire to..

As Saving Mr Banks reveals, Mary Poppins’ stern demeanour stems from pain. As P. L. Travers says to Walt Disney: “Mary Poppins and the Bank’s, they’re family to me.” Walt Disney loves Mary Poppins, but Travers knows them as complicated people who bare the scars of tragedy. From pain and suffering we invent and fantasise through our imaginations.

The flashbacks in Saving Mr Banks are set in rural Queensland, where Travers grew up. They tell a dark and grim tale. Travers’ father suffers from alcoholism, and her mother suffers from an illness that results in her attempted suicide.

As the ‘original’ film is being made in the Los Angeles Disney studios, the real life Travers, played by Emma Thompson, obliquely remarks upon and foreshadows the flashback scenes.

“Being a mother is a job, a very difficult job, and one that not everyone should have taken on in the first place.”

The script echoes off itself, transferring one line from one character in one era, and then repeating that same line in a different character in a different era. In one of the opening scenes, Traver’s father, played by Colin Farrell, says “a leisurely stroll is a gift, darling, it’s a gift.” And then the Hollywood driver, played by Paul Giamatti, says the exact same thing when driving Travers back to her hotel.  The contexts and meanings are different, but the important point is that a writer has a finely tuned ear for these echoes. We see Traver’s reaction to these echoes and they transpire into her transformation, which is to share her family with the world, and to not be ashamed of her past.

The reluctant and cantankerous Traver’s in Saving Mr Banks is directly related to her childhood. Her demands on Disney and the studio employees represent her desire for control. For example, she demands that there can be no hint of romance between Mary Poppins and Mr Banks.

In fact, Mary Poppins is not a love story. There is no romance, and the love shared between the characters is always mediated by a collective activity: floating on the roof using laughing gas, flying a kite, and so on. No one declares their love for one another. No one is allowed sentiment. We feel the love the characters have for one another. We have to sense how they feel toward one another and through that sensing we become part of the story.

So, what kind of story has Traver’s created?

The book is much shorter the original and revamped film. In a 1977 interview on Desert Island Discs Travers remarked, “I’ve seen it once or twice, and I’ve learned to live with it. It’s glamorous and it’s a good film on its own level, but I don’t think it is very like my books.”

This assessment rings true for me. In the book/s there are no songs to fill out the space between the episodes. The paragraphs are short, yet contain interesting turns. Mary Poppins, like the words on the page, never explain; the logic of the text is left to the reader to decipher. This gap presses on the imagination of the audience, and from the snippets of detail we are given about Mary Poppins, mostly sniffs, we reach out toward the archetype of the character, the universal interloper/healer/giver of gifts. An outsider has the freedom to express themselves freely, and to leave when they’re no longer needed.

It’s Mary Poppins who gives structure to the play of the children. She guides them and provides for them a language in order to make more meaningful connections between disparate parts of their lives. So when Michael wakes up with a “curious feeling inside him”, it’s Mary Poppins who tells him he woke up on the ‘wrong side of the bed’. Michael’s grumpiness is a sign he’s becoming an adult, and Mary Poppins is there to guide him:

“He waited, wondering what she would do, and was surprised when, without a word, she went to the bathroom and turned on the tap herself. He took his towel and went slowly in as she came out. And for the first time in his life Michael entirely bathed himself. He knew by this that he was in disgrace, and he purposely neglected to wash behind his ears.” p. 76

The characters different attitudes are constantly overlapping one another, but they move forward in a playful and stoic manner. They make light of their problems through their interaction with one another. Mary Poppins is the one who makes sense of what happens and when it feels like nothing is going to happen, she makes things happen. She is wise in this way. The hand of wisdom is always invisible:

“I hate being good,” he said aloud to himself [Michael], as he trailed after Mary Poppins and Jane and the perambulator on the afternoon walk to the Park.

“Don’t dawdle,” said Mary Poppins, looking back at him.

But he went on dawdling and dragging the sides of his shoes along the pavement in order to scratch the leather.

Suddenly Mary Poppins turned and faced him, one hand on the handle of the perambulator.

“You,” she began, “got out of bed the wrong side this morning.”

“Every bed has a wrong side and a right side,” said Mary Poppins, primly.

“That makes no difference. It’s still a side,” scoffed Mary Poppins.

“Both sides were the wrong side, this morning, Mr Smarty!”

Throughout the book we are given the sense that this story has been told before, and will be told again and again. A walk in the park, visiting The Bird Woman, getting high on Laughing Gas, being visited by The Dancing Cow and Christmas Time are all repeatable occasions which we can enter, and discover how we’ve changed. We learn about ourselves through our rituals and traditions, because we can observe how we react differently to last time, or the time before. Thus, the plot and character arch of the tale Traver’s has created is mythological; it’s about the stories we tell ourselves.

After visiting The Bird Woman Jane and Michael love hearing from Mary Poppins what The Bird Woman gets up to overnight. They’ve heard the story before, but the joy is in the hearing, and in the telling, and remembering of detail. The effect is to suggest to us the elements we need for contentment are already in our lives, we just need to open up to ourselves and to one another.

Out of a mind like Traver’s comes our greatest children’s stories. The greater the suffering the greater the need to fantasise. But our fantasies have two sides, a happier, lighter side; and a darker, more serious side. Mary Poppins gives us some idea of how to control our fantasies. She has been there and she’s back, and she is here to let us know how the two sides of the same fantasy can co-exist. ‘Adults’, those serious and playless people, have withdrawn from fantasy because they cannot handle the darker side, and their imagination pays the price for that withdrawal.

At the end of ‘The Bird Woman’ chapter:

“Yes, and some on her knee. Then she smooths down the head-feathers of each one in turn and tells it to be a good bird—“

“In the bird language?”

“Yes. And when they are all sleepy and don’t want to stay awake any longer, she spreads out her skirts, as a mother hen spreads out her wings, and the birds go creep, creep, creeping underneath. And as soon as the last one is under she settles down over them, making little brooding, nesting noises and they sleep there till morning.”

Michael laughed happily. He loved the story and was never tired of hearing it.

“And it’s all quite true isn’t it?” he said, just as he always did.

You might have noticed that my posts have poor layouts recently. WordPress have changed their formatting and it’s not intuitive. I’ll be posting poems and stories as images and pdfs from now on. Thanks

Please see attached a sneak peek at the novel I’ve been working on for the last three years. I plan to have it finished sometime around October 2019.

Click on the image below to read the pdf.